Yes, the Napa Valley Wine Train is a luxurious journey. A one-of-a-kind adventure. But it is first and foremost a restaurant. Yellowfin tuna tartare. Pan-seared Pacific halibut. Roasted tenderloin of beef. Fresh local produce. Napa-style, multiple course gourmet meals. We take pride in the decadent quality of our cuisine. And the fact that it’s created onboard a moving antique train.

Our four onboard kitchens allow our chefs to create culinary works of art from scratch, made to order. Whatever dish you choose, luxurious ambiance is always served.

The Wine Train is a culinary experience that transports you back in time. Back to a time when trains were the sophisticated and elegant way to travel. When guests could explore the train as the land slipped by, relaxing comfortably in the opulent décor while they waited for dinner to be served. The dining cars were the heart of train life.

Donald Young is an extraordinary culinary talent originally from Boston Massachusetts and brings his passion for cooking to his role as executive chef of the Napa Valley Wine Train.

Prior to his move to Napa, Young spent three years as executive chef at PGA National Resort & Spa a four star- four diamond resort located in Palm Beach Gardens, Florida overseeing a kitchen staff of 75 cooks, and five chefs in a venue that included several dining outlets, high volume catering and served as host to one of the largest golf tournaments in the United States, The Honda Classic. 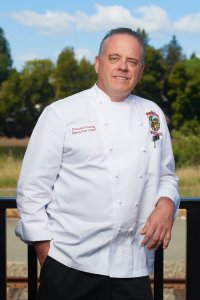 Young has worked in many facets of the restaurant industry, holding positions as executive sous chef at The Boca Raton Resort and Club, executive chef at Gulf Stream Bath and Tennis Club and banquet chef for The Four Seasons Ocean Grand Hotel in Palm Beach.

Outside of his professional life, Young is a humanitarian. He has worked with Habitat for Humanity to construct affordable housing for families in need. In addition he is passionate about playing golf and is an avid reader of History.

Young graduated from Johnson and Wales College in Providence, R.I. with a degree in Culinary Arts and Hotel Restaurant Management. He credits his first professional chef David Woodward from Liverpool England and Robbin Haas from Baltimore for encouraging the strong work ethic and ability to multi-task that has enabled him to be successful for so many years.

Every day, we serve a variety of guests with different dietary restrictions and food allergies. All of our menu choices are prepared fresh and made to order on board the Train, but some advance notice helps handle special menu requests. When making your reservation, please alert your booking agent of your needs. The agent will submit your information to our kitchen staff and to our onboard manager. And when you arrive, remind your server which member of your party has the allergy. Rest assured, we handle hundreds of allergies weekly with ease. You’re in good hands.